Disciplined convex programming (DCP) is a system for constructing mathematical expressions with known curvature from a given library of base functions. CVXPY uses DCP to ensure that the specified optimization problems are convex.

This section of the tutorial explains the rules of DCP and how they are applied by CVXPY.

Visit dcp.stanford.edu for a more interactive introduction to DCP.

Expressions in CVXPY are formed from variables, parameters, numerical constants such as Python floats and Numpy matrices, the standard arithmetic operators +, -, *, /, @, and a library of functions. Here are some examples of CVXPY expressions:

Expressions can be scalars, vectors, or matrices. The dimensions of an expression are stored as expr.shape. The total number of entries is given by expr.size, while the number of dimensions is given by expr.ndim. CVXPY will raise an exception if an expression is used in a way that doesn’t make sense given its dimensions, for example adding matrices of different size. The semantics for how shapes behave under arithmetic operations are the same as for NumPy ndarrays (except some broadcasting is banned).

CVXPY uses DCP analysis to determine the sign and curvature of each expression.

Each (sub)expression is flagged as positive (non-negative), negative (non-positive), zero, or unknown.

The signs of larger expressions are determined from the signs of their subexpressions. For example, the sign of the expression expr1*expr2 is

The sign of an expression is stored as expr.sign:

using the curvature rules given below. As with sign analysis, the conclusion is always correct, but the simple analysis can flag expressions as unknown even when they are convex or concave. Note that any constant expression is also affine, and any affine expression is convex and concave.

DCP analysis is based on applying a general composition theorem from convex analysis to each (sub)expression.

The curvature of an expression is stored as expr.curvature:

The infix operators +, -, *, / and matrix multiplication @ are treated exactly like functions. The infix operators + and - are affine, so the rules above are used to flag the curvature. For example, expr1 + expr2 is flagged as convex if expr1 and expr2 are convex.

expr1*expr2, expr1/expr2, and expr1@expr2 can only be DCP when one of the expressions is constant. The curvature rules above apply. For example, expr1/expr2 is convex when expr1 is concave and expr2 is negative and constant.

DCP analysis breaks expressions down into subexpressions. The tree visualization below shows how this works for the expression 2*square(x) + 3. Each subexpression is shown in a blue box. We mark its curvature on the left and its sign on the right. 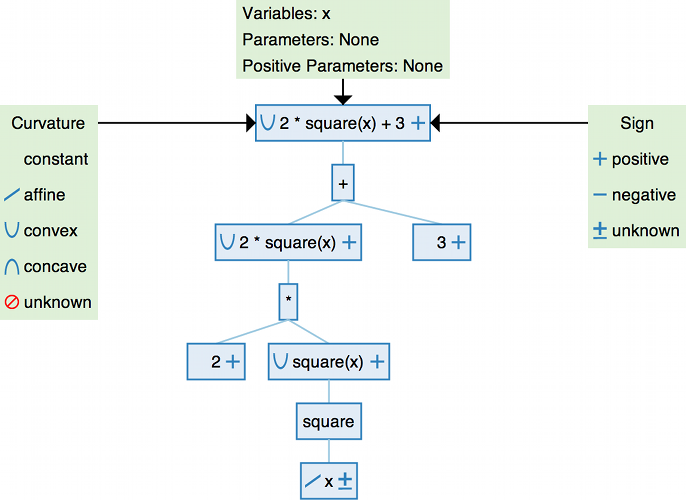 We’ll walk through the application of the DCP rules to the expression sqrt(1 + square(x)). 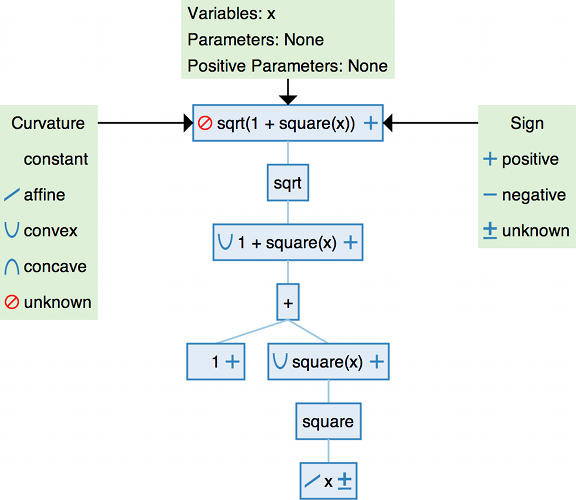 The variable x has affine curvature and unknown sign. The square function is convex and non-monotone for arguments of unknown sign. It can take the affine expression x as an argument; the result square(x) is convex.

A problem is constructed from an objective and a list of constraints. If a problem follows the DCP rules, it is guaranteed to be convex and solvable by CVXPY. The DCP rules require that the problem objective have one of two forms:

The only valid constraints under the DCP rules are

You can check that a problem, constraint, or objective satisfies the DCP rules by calling object.is_dcp(). Here are some examples of DCP and non-DCP problems: